Hope for Home Ministries was founded in August 2008 by Daryl and Wanda Fulp. Having adopted three children with special needs internationally, their eyes had been opened to the plight of orphans and physically and mentally challenged children in developing countries, and they longed to do something to make a significant impact.

In the early days, Hope for Home was an advocacy ministry that shared the needs of these children with the church and sought to pair Christian families with children through adoption and leading short-term ministry trips to Guatemala. But in 2009 Daryl and Wanda felt God's call to something more. They placed their home on the market, sold most of their possessions, and moved themselves and their nine children to Guatemala in January 2011.

There, along with a team that God brought together, they established a rural village ministry that provides assistance to children witsh special needs. They also opened three family-based group home for children with special needs,

And from there ministry has grown, both in Guatemala and in Africa. Currently Hope for Home is  working to open a home for adults with special needs in Guatemala and its rural village ministry will soon expand into 14 of Guatemala's 22 departments, with long-term plans to establish ministry in every department. In 2019 a birthing center was opened in Escuintla, Guatemala, along with a feeding program in Aceituna, Guatemala. That same year, a nutrition center was opened for severely malnourished children in San Antonio Aguas Calientes and formula programs were established in two communities to provide nourishment to malnourished children and pregnant and nursing mothers.

Meanwhile, under the leadership of Don and Melanie Riley, a new village for children with special needs opened in Liberia, Africa, along with a two schools, two group homes for ebola orphans, a mobile medical clinic, and a pastor training center.

Step-by-step, God is blessing and building this ministry for his glory! 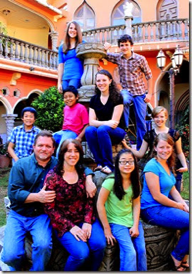